How to Dethatch and Aerate Your Lawn

Lawn care is simple—mow, water, and fertilize. Done! Well, there are two more things most homeowners neglect to do, to the potential detriment of their lawns: dethatching and aeration.

Thatch: A Barrier to Healthy Lawns

Thatch is a layer between the grass and the soil made up of interwoven accumulated dead and living grass shoots, stems, crowns, and roots. It creates a barrier between the soil and the green grass you so adore. A thin layer of thatch is good—about a half-inch. It helps maintain steady soil moisture and temperature. It becomes problematic when it’s thicker. 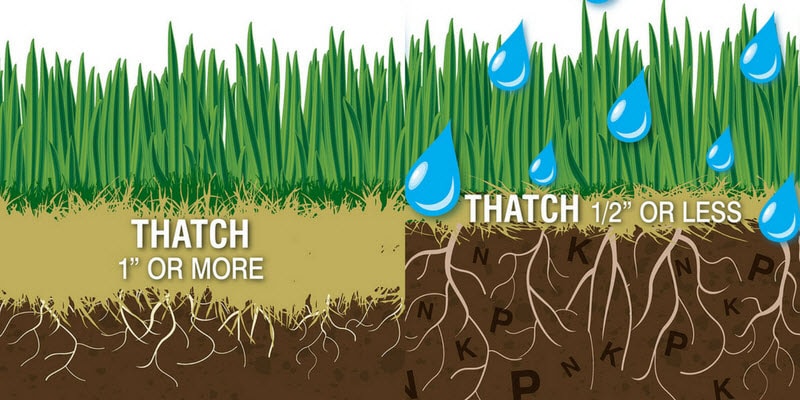 Thatch can harm lawns. It’s difficult for water to penetrate a thick thatch layer, causing water to run off instead of soaking in. It can harbor insects and lawn diseases, and grass may begin growing in the thatch layer instead of the soil, producing shallow root systems and exposing it to greater temperature extremes. It can block air, nutrients, and pesticides from reaching the roots.

You can tell if your lawn has a thatch problem when water runs off the lawn instead of soaking and you’ll begin to notice grayish-brown matts. To determine how much thatch has accumulated, cut out a wedge of lawn about two-inch deep. It should be fairly easy to identify the thatch layer between the soil and grass.

Am I Harming My Lawn?

Overwatering and over-fertilization contribute to thatch build-up. It’s too much of a good thing. Although infrequent mowing may be good for you, it’s not good for your lawn. You need to find a healthy maintenance balance for your lawn. The goal is to maintain your lawn so that the accumulated plant debris can decompose at the same rate the grass grows. Mow at a height and frequency recommended for your variety of grass. Use the 1/3 rule when mowing—remove no more than one-third of the blade of grass in a single mowing.

Some believe grass clippings cause thatch, but they don’t. Grass is mostly water and decomposes fairly quickly and returns nutrients to the soil. Grasscycling provides free fertilizer. Using a mulching mower helps speed the decomposition of the smaller clippings.

Fertilize as recommended, using a low-nitrogen or slow-release fertilizer like Milorganite.

The best time to dethatch depends on grass variety and location but is optimal when the lawn is actively growing and has time to recover. In the north, late summer or early fall before the grass goes dormant are good times to dethatch, and late spring in the south.

For small areas, you can use a hand dethatching rake. I’m talking about small areas. If you’ve got a large yard—even average-sized—you would have to reserve a work week using a dethatching rake and buy a box or two of BAND-AIDs® to tend to your blisters. Leaf rakes and hard rakes could be used, but they’re just not up to the task.

Thatch builds up over time, so it’s not necessary to dethatch every year. Plan on doing it every five years or so if your lawn needs it. You might want to give your lawn a quick check every year just to see how much thatch has accumulated.

Time your long-term dethatching and aeration (we’ll get to that momentarily) schedule. We recommend aerating your lawn every other year and dethatching in a year you’re not aerating.

A dethatching machine has blades that cut through and remove thatch to the soil surface. Those with knives or blades are preferred over those that use rake-like tines. Rent a dethatcher from a big-box store or equipment rental company. They’re heavy, so you’ll need a truck and a friend or two to lend a hand.

Follow the manufacturer’s instructions for using the dethatcher. Make sure the lawn is slightly moist, but not wet. Rock-hard soil is difficult to penetrate. Go over your lawn once, like your mowing. If there’s a lot of thatch, you may need to make another pass in the opposite direction to remove it all.

You’re going to have a lot of material to rake and remove. Depending on the size of your yard and the amount of thatch, it could be a SIGNIFICANT amount. You can add the debris to your compost pile (You are composting, aren’t you?) or use it as mulch around trees and shrubs ONLY if it has not been treated with an herbicide. It’ll add organic matter to the soil as it breaks down. After raking, thoroughly water the lawn. Avoid a lot of traffic on the lawn, over- or under-watering, and chemical applications until normal growth has resumed.

Prepare yourself. Your lawn is going to look, well… terrible, awful, ratty, or ragged for several weeks after dethatching. If it does, you did it correctly!

Thatch builds up over time, so it’s not necessary to dethatch every year. Plan on dethatching every five years or so if your lawn needs it. You might want to give your lawn a quick check every year just to see how much thatch has accumulated.

Aeration: Breathe Life into Your Lawn

The soil your lawn is growing in compresses over time. Compacted soil causes some of the same problems thatch does. The soil can become so dense water has a difficult time seeping in, grass struggles to grow, and roots gasp for air. 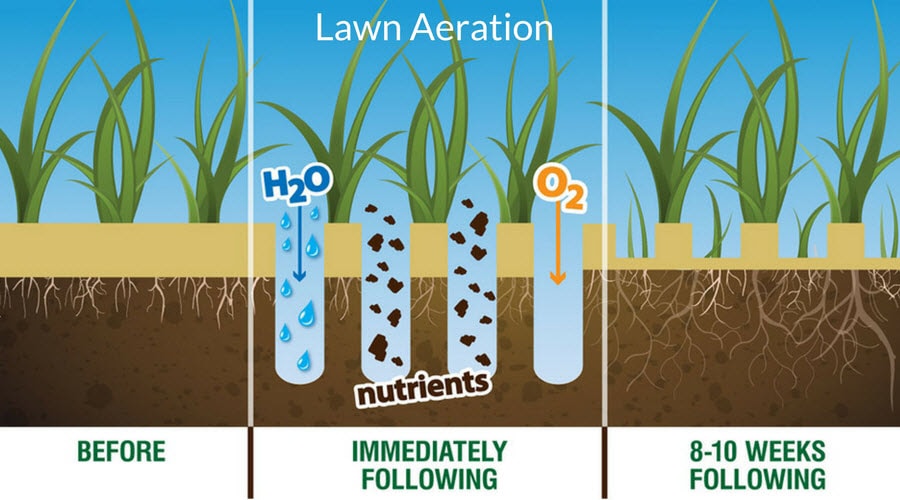 Aeration is the process of making holes in the lawn, which loosens the soil to improve drainage, making it easier for water, air, and fertilizer to reach the roots. It gives the roots some room to grow deeply. The result is a thicker, healthier lawn. Unfortunately, homeowners very often neglect this important maintenance practice.

There are two methods of aeration: tine or spike aeration, and core or plug aeration. Tine aeration uses tines to pierce the soil. Unfortunately, it can also further compact the soil; some don’t consider it to be aeration at all. Core aeration removes plugs of soil from the lawn and is the preferred method. Core aeration can also keep the thatch layer in check. Aeration equipment that’s pulled behind mowers tends to be ineffective.

When heavily traveled paths on the lawn start to look weak and there’s a thatch layer of an inch or more, it’s time to aerate. Lawns in good condition, with a half-inch or less of thatch, generally don’t need to be dethatched and should only need to be aerated every other year.

When and How to Aerate Your Lawn

In the north, aerate in early fall; doing it in spring can damage tender grass shoots. Avoid aerating in fall when the grass is dormant. In the south, aerate in mid-spring to early summer.

Rent an aerator from a big-box store or equipment rental company. No need to invest in equipment that takes up space and you’ll only use once every couple of years. Bring your truck and the same friends who helped you haul the dethatcher. (You may owe them a beer this time.) Consider sharing the rental cost with those same friends so they can aerate their lawns, too. Follow the manufacturer’s directions when operating the aerator. 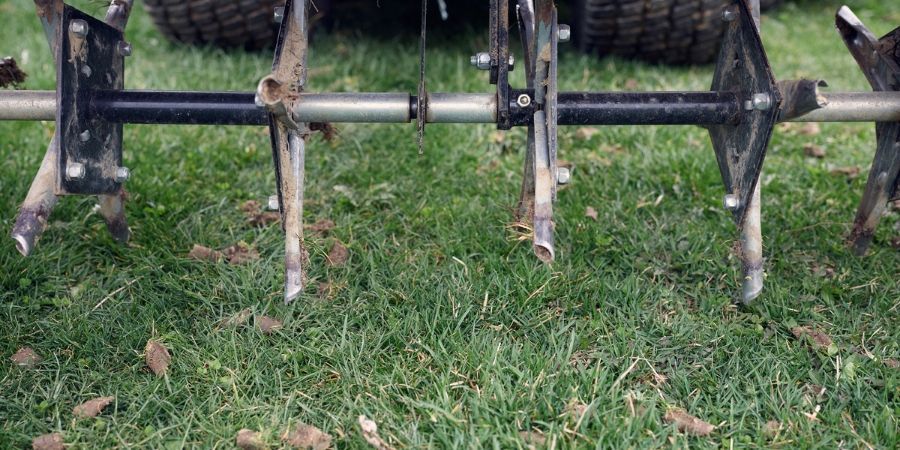 Recommendations lean toward removing as many cores as possible—20 to 40 per square foot at a depth of 2–3 inches. Run the aerator several times in different directions if you’re not getting the recommended number of holes in one pass and to loosen up highly compacted soil. Before you begin, mark sprinkler heads and anything else that may be damaged while aerating.

Core aeration will leave cores of soil on the surface of your lawn. Just leave them. They’ll breakdown and the soil will work its way back down. Like dethatching, you may be a little embarrassed by how your lawn looks. It can take up to six weeks for grass to fill the resulting holes. Be strong. It’s going to look so much better.

After your lawn is breathing easier, it’s the perfect time to overseed and fertilize using a slow-release fertilizer like Milorganite.

If aerating or dethatching is a daunting task. Call a landscape maintenance company and save the beer for yourself.